For the last 3 years we have been tracking the trends of the IoT developer community through the IoT Developer Survey [2015] [2016]. Today, we released the third edition of the IoT Developer Survey 2017. As in previous years, the report provides some interesting insights into what IoT developers are thinking and using to build IoT solutions. Below are some of the key trends we identified in the results.

The survey is the results of a collaboration between the Eclipse IoT Working Group, IEEE, Agile-IoT EU and the IoT Council. Each partner promoted the survey to their respective communities. A total of 713 individuals participated in the survey. The complete report is available for everyone and we also make available the detailed data [xls, odf].

As with any survey of this type, I always caution people to see these results as one data point that should be compared to other industry reports. All of these surveys have inherent biases so identifying trends that span surveys is important.

The 2017 survey participants appear to be involved in a more diverse set of industries. IoT Platform and Home Automation industries continue to lead but industries such as Industrial Automation, Smart Cities, Energy Management experience significant growth between 2016 to 2017.

2. Security is the key concern but….

Security continues to be the main concern IoT developers with 46.7% respondents indicating it was a concern. Interoperability (24.4%) and Connectivity (21.4%) are the next most popular concerns mentioned. It would appear that Interoperability is on a downward trend for 2015 (30.7%) and 2016 (29.4%) potentially indicating the work on standards and IoT middleware are lessening this concern.

This year we asked what security-related technologies were being used for IoT solutions. The top two security technologies selected were the existing software technologies, ie. Communication Security (TLS, DTLS) (48.3%) and Data Encryption (43.2%). Hardware oriented security solutions were less popular, ex. Trusted Platform Modules (10%) and Hardware Security Modules (10.6%). Even Over the Air Update was only being used by 18.5% of the respondents. Security may be a key concern but it certainly seems like the adoption of security technology is lagging.

Java and C are the primary IoT programming languages, along with significant usage of C++, Python and JavaScript. New this year we asked in the survey, language usage by IoT categories: Constrained Devices, IoT Gateway and IoT Cloud Platform. Broken down by these categories it is apparent that language usage depends on the target destination for the developed software:

Overall, it is clear IoT solution development requires a diverse set of language programming skills. The specific language of choice really depends on the target destination.

The survey also asked which Linux distro is being used. Raspbian (45.5%) and Ubuntu (44.%) are the two top distros for IoT.

If Linux is the dominant operating system for IoT, how are the alternative IoT operating systems doing? In 2017, Windows definitely experienced a big jump from previous years. It also seems like FreeRTOS and Contiki are experiencing growth in their usage.

Amazon (42.7%) continues to be the leading IoT Cloud Platform followed by MS Azure (26.7%) and Google Cloud Platform (20.4%). A significant change this year has been the drop of Private / On-premise cloud usage, from 34.9% in 2016 to 18.4% in 2017. This might be an indication that IoT Cloud Platforms are now more mature and developers are ready to embrace them.

For the last 3 years we have asked what connectivity protocols developers use for IoT solutions. The main response has been TCP/IP and Wi-Fi. However, there are a number of connectivity standards and technologies that are being developed for IoT so it has been interesting to track their adoption within the IoT developer community. Based on the 2017 data, it would appear Bluetooth/Bluetooth Smart (48.2%), LPWAN technologies (ex LoRa, Sigfox, LTE-M) (22.4%) and 6LoWPAN (21.4%) are being adopted by the IoT developer community. However, it would appear Thread (6.4%) is still having limited success with developer adoption.

Next week we will be doing a webinar to go through the details of the results. Please join us on April 26 at 10:30amET/16:30pmCET. 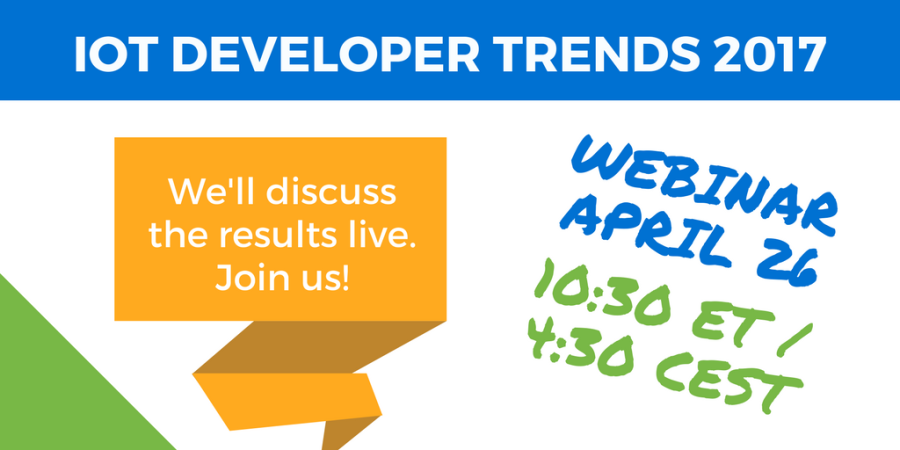 Thank you to everyone who participated in the survey, the individual input is what makes these surveys useful. Also, thank you to our co-sponsors Eclipse IoT Working Group, IEEE, Agile IoT and the IoT Council. It is great to be able to collaborate with other successful IoT communities.

We will plan to do another survey next year. Feel free to leave any comments or thoughts on how we can improve it.